Like many avid readers, I accumulate books faster than I can read them. Through the years, I've bought several shelves' worth of books, and while I've read a large majority of them, there are many books in my possession that I haven't read yet. Throw in the e-books that I've downloaded to my Kindle, and my TBR list is pretty darn long!

At the beginning of this year, I decided to tackle my TBR in earnest. I signed up for the Goodreads Reading Challenge, with a goal of reading 75 books in 2017. That comes out to an average of a little more than 6 books each month. Among those 6 books, I'm vowing that at least two will be from the inventory I already own. (The rest will come from the library, which is where I get most of the books I read.) That means, if I don't buy more than 24 books this year, I should have net fewer books on my TBR list by the end of the year. 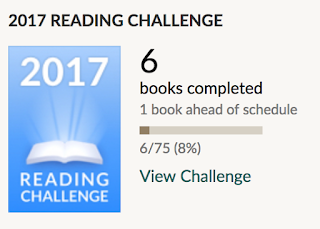 After posting about my favorite reads of 2016, I decided to go through the movies I watched last year (thanks to Netflix, where my ratings are recorded) and post my favorite movies as well. I don't watch as many movies as I read books, so I'm only going to list the top 5.

1. "Rogue One"
I admit that, when I first heard that they were making a standalone Star Wars movie, I was skeptical how it would turn out. Then, when the first trailer of "Rogue One" was released, most of my doubts faded. This turned out to be my favorite movie of the year and one of my favorite Star Wars movies of all time. The fact that I already knew how the story would end didn't diminish my enjoyment of it. I'll also never view the first minutes of "A New Hope" the same way again.

2. "Finding Dory"
I can't count the number of times I've seen "Finding Nemo." Not only did I love the movie, but it was my kids' favorite for a long time too. I was excited when I learned there would be a sequel featuring Dory, and the movie didn't disappoint. It was great to see many of the old characters return for the sequel, but this is really a new story with fresh new characters. Ellen DeGeneres is once again superb as the forgetful Dory.

3. "Fantastic Beasts and Where to Find Them"
Even if you've never seen any of the Harry Potter movies, I think you'll enjoy "Fantastic Beasts." However, as a Harry Potter fan, I appreciated all the little nods to the books found in the movie as well as the chance to see what the wizarding world in the U.S. was like. It also didn't hurt that Newt Scamander is a Hufflepuff like me. :-)

4. "Deadpool"
I didn't expect to like "Deadpool" as much as I did. It wasn't because of the story, which we've seen before. It must've been due to Deadpool's witty commentary, which made me laugh throughout the movie, or the references to other Marvel movies. Although the origin story didn't quite fit the Deadpool character in "X-Men Origins: Wolverine", Ryan Reynolds did a great job in both movies as Wade Wilson/Deadpool.

5. "Zootopia"
"Zootopia" was a cute movie with a nice lesson, especially given the current political climate. Ginnifer Goodwin did a good job bringing Judy Hopps, the protagonist who is a police officer bunny, to life. If you've seen the trailer featuring the sloth at the DMV, that wasn't even one of the best parts of the movie IMHO, so if you liked that scene, you'll really enjoy the rest of the movie.

In my last post, I mentioned that 23 of the books I read in 2016 received 5-star ratings. Among them, these were my top ten favorites. 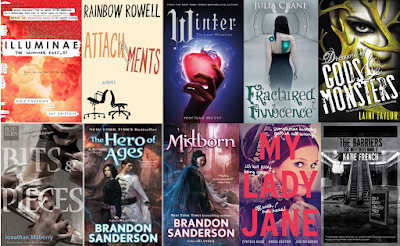 1. Illuminae - Amie Kaufman and Jay Kristoff
I'm not sure how to describe this book, but I loved everything about it. Illuminae was like a YA sci-fi love story with zombies and a homicidal AI rolled into one, told in a unique way that makes it even better than the sum of its parts. If that didn't make any sense (or even if it did), go read the book!

2. Attachments - Rainbow Rowell
Can you believe that I had never read a Rainbow Rowell book until 2016? I know, what kind of rock have I been living under? I went on a Rainbow Rowell reading binge, and Attachments was my favorite of the bunch. This was a fun, fast read that appealed to the romantic comedy fan in me (did I just admit to liking rom com?). I liked this book so much that I read it twice! I'm definitely a Rainbow Rowell fan now.

3. Winter - Marissa Meyer
A great conclusion to a great series. I won’t say more in case you haven’t read Winter or its predecessors yet. However, if you haven't read the Lunar Chronicles, you definitely should!

4. Fractured Innocence - Julia Crane
Freak of Nature was one of my favorite reads of 2013. I can't believe it's taken me this long to read the sequel, but it was well worth the wait. Equal parts YA, sci-fi, and action, this story has all the elements that I enjoy in a good book.

6. Bits & Pieces - Jonathan Maberry
The Rot & Ruin series is one of my favorites of all time. Although the series has ended, it was great to revisit the universe again in this collection of short stories.

7. The Hero of Ages - Brandon Sanderson
2016 was also the year that I read the Mistborn trilogy. Given my notoriously slow pace at finishing a series, it says something that I read all three books in a single year. While all of the books in the trilogy were good, the finale, The Hero of Ages, was my favorite. It was impressive to see how everything fit together in the end. Hats off to Brandon Sanderson for crafting the Mistborn universe and for creating a plot so intricately interwoven that I felt like a fool for not seeing it all sooner.

8. The Final Empire - Brandon Sanderson
Following on the heels of The Hero of Ages, the first book of the Mistborn series was similarly as good. It was hard for me to choose which one to rank higher.

9. My Lady Jane - Brodi Ashton, Cynthia Hand, Jodi Meadows
Historical fiction is typically not my cup of tea, but the comedic elements in this story made it a winner. Fans of The Princess Bride, Monty Python, or even historical fiction should enjoy this re-imagining of Lady Jane Grey, who was queen for only nine days. If you're a stickler for historical accuracy, however, you might want to skip this book. :-)

10. The Barriers - Katie French
Every installment of the Breeders series has made it onto my annual top ten list, and the series finale is no exception. If you’re a fan of the YA dystopian genre, you need to read the Breeders series!