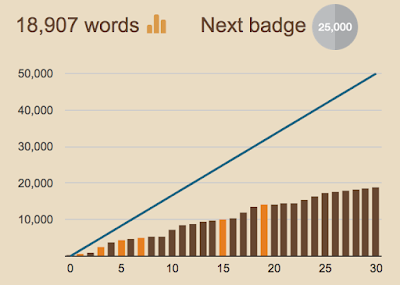 For the fifth year in a row, I participated in NaNoWriMo (National Novel Writing Month), and for the second year in a row, I wrote fewer than 50K words in November. In fact, I wrote fewer words than last year's 30K. This year was particularly disappointing because I thought that 20K words was a realistic target, but I didn't even reach that goal. :-(

As you may be able to tell from the chart above, most of my progress came on the weekends. My word count barely budged during the work week. I attribute it to a particularly hectic month at my day job. On top of that, Thanksgiving weekend, usually the time I catch up if I'm falling behind in NaNoWriMo, was also busier than I thought it would be. It all added up to a woeful output of 18,907 words.

Excuses aside, I'm not completely dissatisfied with what I accomplished this month. Adding 18K+ words to my manuscript in 30 days is nothing to sneeze at, and it was more than what I wrote from June to October. My WIP is also now about three quarters complete by my estimation, giving me hope that I'll finish the first draft early next year. Overall, although I didn't make as much progress during NaNoWriMo as I'd liked, it still gave me a much needed boost. For that reason alone, NaNoWriMo was worth doing again this year, even if it meant I didn't receive the shining badge for reaching 50K (or 25K) words.